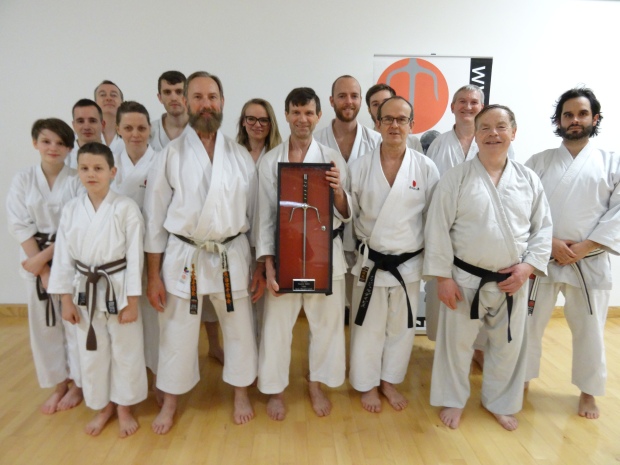 The club’s final special event of the year was to celebrate our Chief Instructor, Sensei Ron Hicks’ 60th birthday, which occurs over the Christmas holiday. Ron has been an inspirational club instructor, who leads from the front, both technically and in his instruction across all grades in the club. Ron has been a member of Bath karate club for over 40 years and still approaches training and instruction with the enthusiasm of a newly minted Dan grade!

As a token of our appreciation and as a birthday present, the club’s senior instructors have had made a 3D model of Bath karate club’s logo – a vertical sai on a red background. The sai is a traditional karate weapon originating from Okinawa. Normally, sai come as a pair and can be used to strike and block in a similar fashion to how Shotokan karate’s punches and blocks are executed.

Ron’s gift features a pair of sai in a frame (only one sai is visible, the other is behind the background). Bath karate club has used a single sai as its logo since its formation in 1969. The prongs of the sai represent the three components of Shotokan karate:  kihon (fundamentals), kata (forms), and kumite (sparring).

Training has now finished for 2016 – it resumes on Thursday 5th January 2017. On behalf of all of club’s instructors, we wish our members, families and friends a peaceful and healthy Christmas, and best wishes for the New Year.