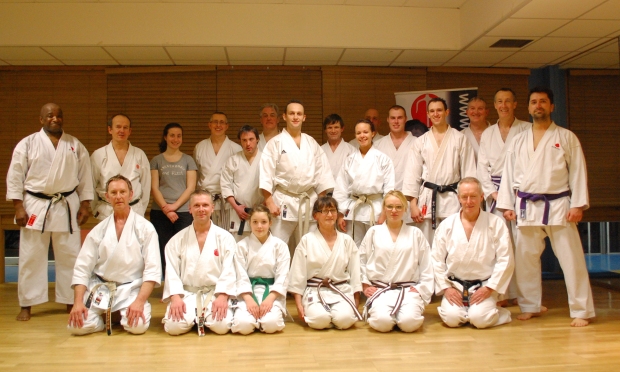 Tonight, Bath Shotokan karate club were privileged to have two very exciting guest instructors. Sensei John James Bruce and Sensei Holly Sterling had travelled from Sendai and Kushiro Karate club from the other end of the UK to take our club session, as part of their tour of Southern England clubs. Both JJ Bruce and Holly Sterling have extensive karate CVs with equally large trophy cabinets from their competition successes. The class was split into two – with both instructors working with black belts and kyu grades separately. The sessions focused on precise and fast movements, improving kicking through being relaxed and breathing properly, and kumite drills based around agile movements off line from the direction of attack. Kata instruction also focused on precision, speed and finally martial spirit! Everyone enjoyed the evening which seemed to fly by, and all left having found something new to work on to improve their karate. We’re hoping that JJ and Holly will return to instruct again soon.